Common, in places rare breeding migrant and rare winter visitor. Inhabits various forests both on plains and in mountains at altitudes up to 2000 m on Altai and 3000 m in Tien Shan; forested river valleys; shelterbelts, groves and gardens. In spring appears early, in February or in March. Latest migrants recorded in mid-April – early May. Breeds by separate pairs in old nests of Magpie, Crow, Rook, Buzzard or Kite, rare on ground under bush. Clutch of 4-6 eggs is laid in mid-March to mid-May. Such long breeding period explained by the differing of latitude or altitude of breeding places, by the later nesting of first breeders, and the re-nesting after loss of first clutch. Only female incubates clutch for 27-28 days from the first egg laying; both parents feed offspring. Juveniles fledge in end April to July, and parents feed them two months after fledging. Autumn migration begins in mid-September, in this time the loose flocks of two-three dozen birds can be observed. Mass migration occurs in first half of October, and finishes in November. 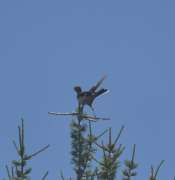