Rare breeding and common passage migrant. Inhabits the wet meadows in river valleys and near steppe lakes, or the high-grassed shores of the saline-soil lake. On migration visits the shores of various reservoirs, the stubble fields or steppe lands far from the water. In spring appears in late April - early May in southern areas, and later in northern ones, arrives in small groups or flocks of 30-50, up to some hundred birds. First arriving males begin to mating-dance. Then females appear. Female build the nest on tussock, among meadow or on island in colony of Terns and other waders; nest is located in shallow hole and is lined with dry grass. Clutches of 4 eggs is late May and early June in the south of the region. Alone female incubates for 21 days and cares for juveniles. The autumn migration begins in the end of June when the males with moulting collars and inner primaries gradually migrate in southern direction. In mid July females begin to migrate too, and juveniles move still later. Main stream of migration is in August – early September, last birds can be seen in late September. 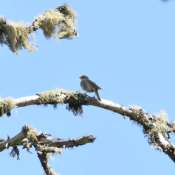